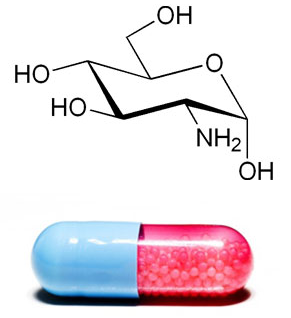 Glucosamine (C6H13NO5) is an amino sugar and a prominent precursor in the biochemical synthesis of glycosylated proteins and lipids.

The terms niacin, nicotinamide, and vitamin B3 are often used interchangeably to refer to any member of this family of compounds since they have similar biochemical activity.

Glucosamine is part of the structure of the polysaccharides chitosan and chitin, which compose the exoskeletons of crustaceans and other arthropods, cell walls in fungi and many higher organisms.

Glucosamine is one of the most abundant monosaccharides. It is produced commercially by the hydrolysis of crustacean exoskeletons or, less commonly by fermentation of a grain such as corn or wheat.

In the US it is one of the most common non-vitamin, non-mineral, dietary supplements used by adults.