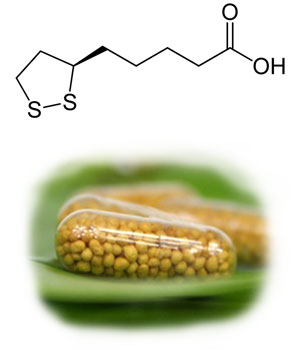 Lipoic Acid (LA), also known as α-lipoic acid and Alpha Lipoic Acid (ALA)is an organosulfur compound derived from octanoic acid. LA contains two vicinal sulfur atoms (at C6 and C8) attached via a disulfide bond and is thus considered to be oxidized (although either sulfur atom can exist in higher oxidation states).

The carbon atom at C6 is chiral and the molecule exists as two enantiomers R-(+)-lipoic acid (RLA) and S-(-)-lipoic acid (SLA) and as a racemic mixture R/S-lipoic acid (R/S-LA). Only the R-(+)-enantiomer exists in nature and is an essential cofactor of four mitochondrial enzyme complexes.

Endogenously synthesized RLA is essential for life and aerobic metabolism. Both RLA and R/S-LA are available as over-the-counter nutritional supplements and have been used nutritionally and clinically since the 1950s for a number of diseases and conditions. LA appears physically as a yellow solid and structurally contains a terminal carboxylic acid and a terminal dithiolane ring.