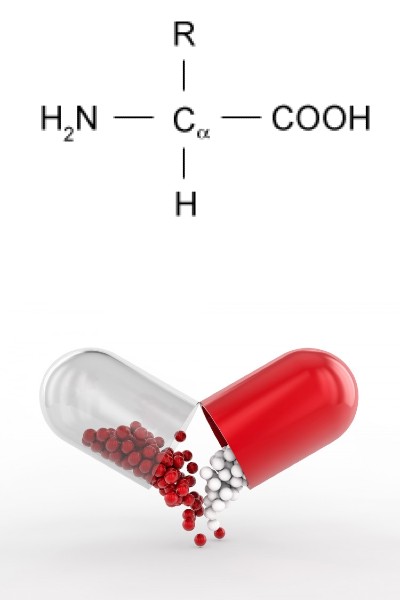 Amino acids are molecules containing anamine group, a carboxylic acid group and a side-chain that varies between different amino acids.

The key elements of an amino acid are carbon, hydrogen, oxygen, and nitrogen. They are particularly important in biochemistry, where the term usually refers to alpha-amino acids.

An alpha-amino acid has the generic formula H2NCHRCOOH, where R is an organic substituent; the amino group is attached to the carbon atom immediately adjacent to the carboxylate group (theα–carbon).

The various alpha-amino acids differ in which side-chain (R-group) is attached to their alpha carbon, and can vary in size from just one hydrogen atom in glycine to a large heterocyclic group intryptophan.

Amino acids are critical to life, and have many functions inmetabolism. One particularly important function is to serve as the building blocks of proteins, which are linear chains of amino acids.

Amino acids can be linked together in varying sequences to form a vast variety of proteins. Twenty-two amino acids are naturally incorporated into polypeptides and are called proteinogenic or standard amino acids. Of these, 20 are encoded by the universal genetic code.

Eight standard amino acids are called "essential" for humans because they cannot be created from other compounds by the human body, and so must be taken in as food.

Due to their central role in biochemistry, amino acids are important in nutrition and are commonly used in food technology and industry. In industry, applications include the production of biodegradable plastics, drugs, and chiral catalysts.