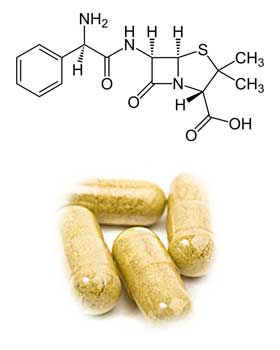 Ampicillin is a beta-lactam antibiotic that has been used extensively to treat bacterialinfections since 1961. Until the introduction of ampicillin by the British company Beecham, penicillin therapies had only been effective against Gram-positive organisms such asstaphylococci and streptococci.

Ampicillin is part of the aminopenicillin family and is roughly equivalent to its successor, amoxicillin in terms of spectrum and level of activity.

It can sometimes result in reactions that range in severity from a rash (in the case of patients that may unwittingly have mononucleosis) to potentially lethal allergic reactions such asanaphylaxis.

However, as with other penicillin drugs, it is relatively non-toxic and adverse effects of a serious nature are encountered only rarely.

Umang pharmatech has the capability to manufacture Ampicillin Pellets of various particle sizes.