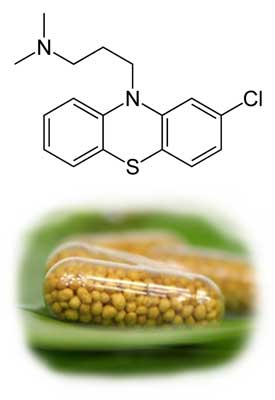 Chlorpromazine is a typical antipsychotic. First synthesized on December 11, 1950, chlorpromazine was the first drug developed with specific antipsychotic action, and would serve as the prototype for the phenothiazine class of drugs, which later grew to comprise several other agents.

The introduction of chlorpromazine into clinical use has been described as the single greatest advance in psychiatric care, dramatically improving the prognosis of patients in psychiatric hospitals worldwide; the availability of antipsychotic drugs curtailed indiscriminate use of electroconvulsive therapy and psychosurgery[citation needed], and was one of the driving forces behind the deinstitutionalization movement.

Chlorpromazine works on a variety of receptors in the central nervous system, producing anticholinergic, antidopaminergic, antihistaminic, and weak antiadrenergic effects. Both the clinical indications and side effect profile of CPZ are determined by this broad action: its anticholinergic properties cause constipation, sedation, and hypotension, and help relieve nausea.

It also has anxiolytic (anxiety-relieving) properties. Its antidopaminergic properties can cause extrapyramidal symptoms such as akathisia (restlessness, aka the 'largactil shuffle' where the patient walks almost constantly, despite having nowhere to go due to mandatory confinement, and takes small, shuffling steps) and dystonia.

It is known to cause tardive dyskinesia, which can be irreversible. In recent years, chlorpromazine has been largely superseded by the newer atypical antipsychotics, which are usually better tolerated, and its use is now restricted to fewer indications.

In acute settings, it is often administered as a syrup, which has a faster onset of action than tablets, and can also be given by intramuscular injection. IV administration is very irritating and is not advised; its use is limited to severe hiccups, surgery, and tetanus.

Umang pharmatech has the capability to manufacture Chlorpromazine Pellets of various particle sizes.