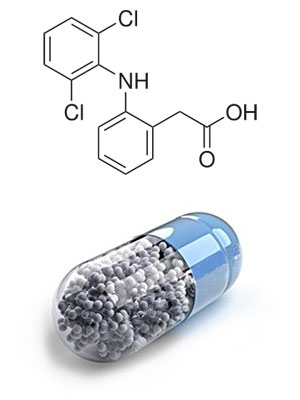 Diclofenac is a non-steroidal anti-inflammatory drug (NSAID) taken to reduce inflammation and as an analgesic reducing pain in certain conditions.

The name is derived from its chemical name: 2-(2,6-dichloranilino) phenylacetic acid.

Diclofenac is available as a generic drug in a number of formulations. Over-the-counter (OTC) use is approved in some countries for minor aches and pains and fever associated with common infections.