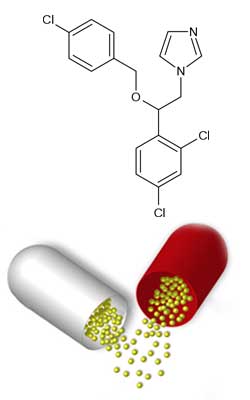 Econazole nitrate is an antifungal medication of the imidazole class.

It is used as a cream under the brand names Spectazole (US), Ecostatin (Canada), Pevaryl (Western Europe) and Pevisone (the latter consisting of the combination econazole/triamcinolone) to treat skin infections such as athlete's foot, tinea, pityriasis versicolor, ringworm, and jock itch.

It is also sold in Canada under the brand name Ecostatin Vaginal Ovules to treat vaginal thrush.

In Asia it is sold under the brand name Endix-G (by Dongkwang, Korea) while in Thailand it's sold as Ecosone by Qualimed. In Taiwan it is sold as VIVICOME CREAM.

Umang pharmatech has the capability to manufacture Econazole Pellets of various particle sizes.