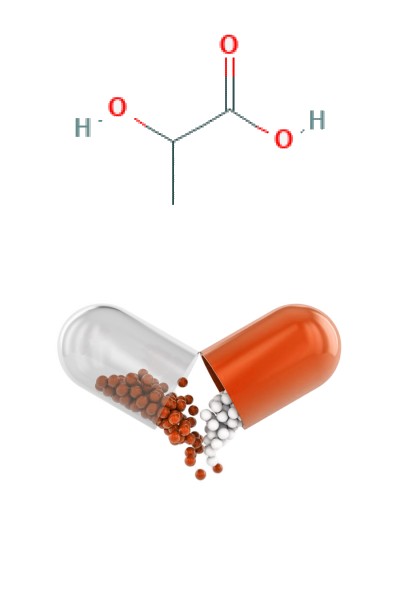 Lactic acid, also known as milk acid, is a chemical compound that plays a role in various biochemical processes and was first isolated in 1780 by the Swedish chemist Carl Wilhelm Scheele.

Lactic acid is a carboxylic acid with the chemical formula C3H6O3.

It has a hydroxyl group adjacent to the carboxyl group, making it an alpha hydroxy acid (AHA).

In solution, it can lose a proton from the acidic group, producing the lactate ion (specifically an anion due to being negatively charged with an extra electron) CH3CH(OH)COO−.

Compared to acetic acid, its pKa is 1 unit smaller, meaning lactic acid looses its proton ten times as easy as acetic acid does.

This higher acidity is the cancequence of the intramolacular hydrogen bridge between the α-hydroxyl and the carboxylate group, making the latter less capable of keeping its proton tight.