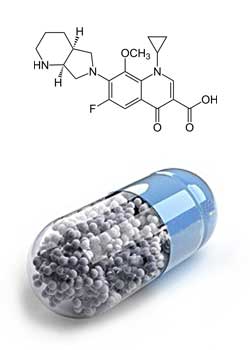 Moxifloxacin is a fourth-generation synthetic fluoroquinolone antibacterial agent developed by Bayer AG (initially called BAY 12-8039). It is marketed worldwide (as the hydrochloride) under the brand names Avelox, Avalox, and Avelon for oral treatment.

In most countries, the drug is also available in parenteral form for intravenous infusion. Moxifloxacin is also sold in an ophthalmic solution (eye drops) under the brand names Vigamox, Moxeza for the treatment of conjunctivitis (pink eye).

A United States patent application was submitted on June 30, 1989 for Avelox (moxifloxacin hydrochloride), but it was not until 1999 (ten years later) that Avelox was approved by the U.S. Food and Drug Administration (FDA) for use in the United States to treat severe and life threatening bacterial infections.

The licensed uses for moxifloxacin are quite limited as moxifloxacin is to be considered a drug of last resort when all other antibiotics have failed. There are currently only six approved uses in the adult population (three of which are restricted) and Vigamox (ophthalmic) is the only one used for children. Moxifloxacin interacts with a number of other drugs, as well as a number of herbal and natural supplements.

Avelox (moxifloxacin) was launched in the United States in 1999 and is currently marketed in more than 80 countries worldwide. In the United States, Avelox is marketed by Bayer's partner Schering-Plough Corporation. Within the past year (2008–2009) Bayer has issued three Dear Doctor Letters concerning severe adverse reactions associated with the use of moxifloxacin, as well as giving notice regarding restrictions in its use. First marketed in 1999, moxifloxacin is Bayer's heir apparent to ciprofloxacin.

As of 2011 the FDA has added two boxed warnings for this drug in reference to spontaneous tendon ruptures and the fact that moxifloxacin may cause worsening of myasthenia gravis symptoms, including muscle weakness and breathing problems. Such an adverse reaction is a potentially life-threatening event and may require ventilatory support.

Umang pharmatech has the capability to manufacture Moxifloxacin Pellets of various particle sizes.