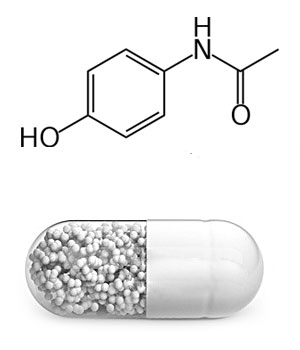 It is commonly used for the relief of headaches, other minor aches, and pains, and is a major ingredient in numerous cold and flu remedies.

In combination with opioid analgesics, paracetamol can also be used in the management of more severe pain such as post-surgical pain and providing palliative care in advanced cancer patients.

The onset of analgesia is approximately 11 minutes after the oral administration of paracetamol, and its half-life is 1–4 hours.

While generally safe for use at recommended doses (1,000 mg per single dose and up to 4,000 mg per day for adults, up to 2,000 mg per day if drinking alcohol), acute overdoses of paracetamol can cause potentially fatal liver damage and, in rare individuals, a normal dose can do the same; the risk is heightened by alcohol consumption.

Paracetamol toxicity is the foremost cause of acute liver failure in the Western world and accounts for most drug overdoses in the United States, the United Kingdom, Australia, and New Zealand.

Umang pharmatech has the capability to manufacture Paracetamol Pellets of various particle sizes.