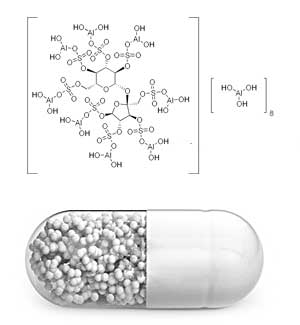 Sucralfate is a cytoprotective agent, an oral gastrointestinal medication primarily indicated for the treatment of active duodenal ulcers.

Brand names include Sucramal in Italy; Carafate in U.S.A.; Pepsigard, Sucral, Sucrafil, Hapifate in India; Sutra in parts of South-East Asia; Sulcrate in Canada; Ulsanic in South Africa; and Antepsin in Turkey. Sucralfate is also used for the treatment of gastroesophageal reflux disease (GERD) and stress ulcers.

Unlike the other classes of medications used for treatment of peptic ulcers, sucralfate is a sucrose sulfate-aluminium complex that binds to the mucosa, thus creating a physical barrier that impairs diffusion of hydrochloric acid in the gastrointestinal tract and prevents degradation of mucus by acid.

It also stimulates bicarbonate output and acts like an acid buffer with cytoprotective properties. Sucralfate was approved by the U.S. Food and Drug Administration (FDA) in 1981.

Umang pharmatech has the capability to manufacture Sucralfate Pellets of various particle sizes.