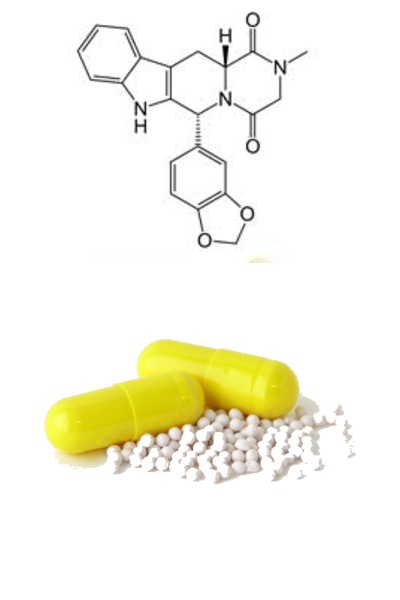 Tadalafil is a PDE5 inhibitor, currently marketed in pill form for treating erectile dysfunction(ED) under the name Cialis; and under the name Adcirca for the treatment of pulmonary arterial hypertension.

It initially was developed by the biotechnology company ICOS, and then again developed and marketed worldwide. Cialis tablets, in 5 mg, 10 mg, and 20 mg doses, are yellow, film-coated, and almond-shaped. The approved dose for pulmonary arterial hypertension is 40 mg (two 20-mg tablets) once daily.

On November 21, 2003, the Food and Drug Administration approved tadalafil (as Cialis) for sale in the United States as the third ED prescription drug pill (after sildenafil citrate (Viagra) and vardenafil (Levitra)).

Cialis's 36-hour effectiveness earned it the nickname, "The Weekend Pill"; like sildenafil and vardenafil, tadalafil is recommended as an 'as needed' medication. Cialis is the only one of the three that is also offered as a once-daily medication.

Moreover, tadalafil was approved in May 2009 in the United States for the treatment of pulmonary arterial hypertension and is currently under regulatory review in other regions for this condition.

*Note - Tadalafil Pellets are available in various strengths. Customized strength of pellets also can be supplied as per the choice of the customers. These are ready to fill Pellets.

Umang pharmatech has the capability to manufacture Tadalafil Pellets of various particle sizes.