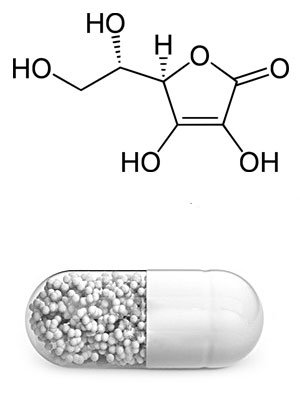 Vitamin C or L-ascorbic acid or L-ascorbate is an essential nutrient for humans and certain other animal species. In living organisms ascorbate acts as an antioxidant by protecting the body against oxidative stress.

It is also a cofactor in at least eight enzymatic reactions including several collagen synthesis reactions that cause the most severe symptoms of scurvy when they are dysfunctional. In animals these reactions are especially important in wound-healing and in preventing bleeding from capillaries.

Ascorbate (an ion of ascorbic acid) is required for a range of essential metabolic reactions in all animals and plants. It is made internally by almost all organisms although notable mammalian group exceptions are most or all of the order chiroptera (bats), guinea pigs, capybaras, and one of the two major primate suborders, the Anthropoidea (Haplorrhini) (tarsiers, monkeys and apes, including human beings). Ascorbic acid is also not synthesized by some species of birds and fish.

All species that do not synthesize ascorbate require it in the diet. Deficiency in this vitamin causes the disease scurvy in humans. It is also widely used as a food additive.

Scurvy has been known since ancient times. People in many parts of the world assumed it was caused by a lack of fresh plant foods. The British Navy started giving sailors lime juice to prevent scurvy in 1795. Ascorbic acid was finally isolated in 1932 and commercially "synthesized" (this included a fermentation step in bacteria) in 1934.

The uses and recommended daily intake of vitamin C are matters of ongoing debate, with RDI ranging from 45 to 95 mg/day.